ASTROCYTES, STAR OF THE GLIAL SHOW 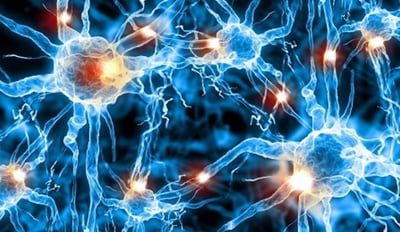 The brain is truly an amazing organ that takes all the credit for man’s ingenuity. From the mastery of daunting foreign languages, to the ability to solve complex problems in multi-variable physics, the brain’s ability to excite and amaze is limitless.

Behind all of these amazing processes, though, are various groups of cells, closely connected together and always communicating. These cells constantly send updates to one another about the state of body parts, the environment and even the brain itself.

In an attempt to understand how the brain works, neuroscience research historically has focused on the neurons, with the assumption that these were the most important cells in the brain. However, more recent studies have revealed that other brain cell types, such as the glial cells, (astrocytes and oligodendrocytes) are just as important.

Glial is derived from the Greek word for glue, and was considered the “glue of the nervous system”. Surrounding each of the neurons, the primary functions of the glial cells include holding the neuron in place, supplying nutrients to the neurons, insulating them from one another and, also, removing pathogens or neuronal waste. Glial cells are key to what has now been termed the “glymphatic system,” and help in the regulation of Amyloid-β (Aβ) levels in the brain. The glymphatic system is a macroscopic waste clearance system that helps eliminate soluble proteins and metabolites from the central nervous system. The mechanisms of Aβ degradation by glial cells include the production of proteases, including neprilysin, the insulin degrading enzyme, and the endothelin-converting enzymes, able to hydrolyse Aβ at different cleavage sites. (Sleep is critical to the health of the glymphatic system.)In addition, glial cells play a role in neurotransmission and physiological processes such as breathing.

Astrocytes, the star-shaped glial cells, have also been found to respond to blood acidity. For example, in one study, when rats inhaled excess carbon dioxide, the astrocytes in the brain stem sensed the blood acidity, and the rats breathed in more deeply to get more oxygen. Some suggest that astrocytes are even more sensitive to neurons. Astrocytes are also closely associated with cerebral blood vessels and are thought to be able to manage the blood supply depending on the metabolic demands. One astrocyte can make contact with thousands of synapses.

Although glial cells, such as astrocytes and oligodendrocytes, have previously been viewed as mere support cells to the neurons, we now know that these cells participate actively in complex brain processes and are indispensable for the proper functioning of the brain. Continued research is revealing the profundity of their role in the brain.

Astrocytes Are Vital for Learning and Memory

According to a recent study published in The Journal of Neuroscience, these star-shaped astrocytes are indeed superstars playing a major role in the ability to learn and retain memories.

Astrocytes produce a protein known as ephrin-B1 and the over- or underproduction of this protein was shown to have an inverse relationship with memory retention. In other words, when overproduced, ephrin-B1 significantly weakens the ability to retain memory, as is the case in neurodegenerative disorders like Alzheimer’s disease.

The study was carried out on adult male mice in the lab by artificially increasing the ephrin-B1 levels in the mice before testing them for memory retention. They observed that the mice were unable to remember a behavior they had recently learned.

Cell-culture studies were also carried out and they observed that when neurons were added to astrocytes that had excessively high ephrin-B1 levels, the synapses between the neurons got removed or “eaten up”. The researchers also found that a significant decrease in the levels of ephrin-B1 resulted in the formation of new synapses, which translated to better learning.

Although these results were obtained from mice, it’s safe to say that they are applicable to humans as well, since astrocytes in the human brain also produce ephrine-B1. The potential application of this study is wide, including traumatic brain injuries where memory loss and increased production of ephrin-B1 are prevalent.

The brain, as we know it, is plastic meaning that it is constantly changing as more synapses are formed rendering the ability to learn new things. But while the credit has been given to neurons for the formation of synapses and information transfer, astrocytes also play a significant role. Astrocytes are intricately connected with synapses, which are the medium of communication between neurons. These communications are moderated by neurotransmitters, which essentially process and integrate information.

Astrocytes and other glial cells do more than just support the neurons in their second-to-second operations; they are of critical importance for brain health. Some theorize a link between altered astrocyte function and Alzheimer’s Disease (AD), targeting water-channel membrane proteins involved in astrocytic signaling as potential therapies.

In the new world of neuronal health, it is important to remember our dear glial cells, the astrocytes.