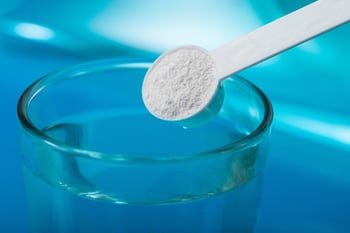 L-glutamine – not the new shiny supplement to wow the nutrition world, but a tried-and-true amino acid that continues to impress us with its relevance and potency as a healing ingredient.

Add to L-glutamine’s impressive resume – lowering the risk of mortality.

Earlier this year, two large prospective studies in US men and women concluded that intakes of glutamine and the glutamine-to-glutamate ratio were associated with “significantly lower risk of total and cause-specific mortality.” The study found that independent of other lifestyle factors, glutamine and glutamine-to-glutamate ratio were inversely related to the risk of mortality, particularly cardiovascular mortality.

The most abundant amino acid in the body, it is no surprise how integral and important L-glutamine is to many aspects of our health. L-glutamine’s primary role is to act as a building block for proteins, however an explosion of research has linked it to stimulating inflammatory cytokines and the production of neurotransmitters, as well as lowering the risk of infection in patients with pancreatitis. L-glutamine’s support of the immune system was highlighted in another study where glutamine-supplemented parenteral nutrition, following cardiac, vascular and colonic surgeries, greatly decreased risk of infection.

In those with compromised immune system functioning? Dietary glutamine was found to reduce the severity of the immunosuppressive effects.

An additional feather in the cap of L-glutamine is its key role in the process of detoxification. It both removes excess levels of ammonia from the body, and has a well-proven ability to elevate glutathione levels, a powerful antioxidant that supports liver detoxification and the removal of ammonia.

As a source of fuel for our cells, L-glutamine specifically vivifies the cells that line our GI tract, helping rebuild and repair the gut from damage. L-glutamine is vital for digestive health as it aids in the regeneration and renewal of cells in the gut.

In addition, it promotes healthy digestion due to its anti-inflammatory effects. For example, a recent study in Nutrients showed how L-glutamine attenuates dextran sulfate sodium (DSS)-induced colitis by induction of MAPK-phosphatase (MKP)-1. DSS is toxic to the epithelial cells in the colon, and can induce ulcerative colitis-like pathologies. As a result, the mucosal barrier becomes compromised. In this study, L-glutamine was found to deactivate or inhibit cytosolic phospholipase A2 (CPLA2), which then resulted in the downregulation of inflammatory processes that would have led to colitis (see figure below). 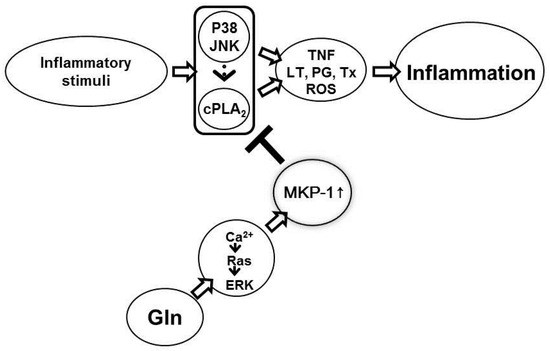 Figure 5. Anti-inflammatory action mechanisms of Gln. Gln binds to G-protein coupled receptors (GPCRs), an allosteric receptor, (unpublished data), and increases ERK activity via activation of the pathway involving Ca2+/Ras/c-Raf/MEK (ERK cascade) [41]. ERK phosphorylates MKP-1 on two carboxyl-terminal serine residues—serine 359 and serine 364, which enhances MKP-1 stabilization, resulting in the early induction of MKP-1 [20]. MKP-1 deactivates cPLA2 either by dephosphorylating p38 [20,23], which is a major upstream pathway for cPLA2 phosphorylation, or by directly dephosphorylating cPLA2 due to enhanced physical interaction between Gln-induced MKP-1 and cPLA2 [24]. Deactivation of p38 and cPLA2 results in suppression of many cardinal inflammatory mediators including reactive oxygen species.

No doubt the body needs L-glutamine. The body obtains its protein from the breakdown of muscle, and uses L-glutamine for restoration and replenishment of stores. Although considered in some circles as a non-essential amino acid, L-glutamine is actually a conditionally essential amino acid because what the body needs to restore itself may sometimes exceed what we are able to produce without dietary support, especially for athletes and those who are critically ill. (Combined with other nutrients, L-glutamine was shown to mitigate muscle wasting and weight loss in patients with HIV.)

If nutrients could gather to receive awards, L-glutamine might be sitting in the back, showing its age just a little, but getting a standing ovation from the crowd for its steady and powerful contribution to our health.