Reduce Your Risk of Arterial Stiffness

Atherosclerosis (or hardening of the arteries) can affect any artery in the body. It is a leading cause of heart disease and stroke.

Stiffening damages fragile capillaries that nourish our organs. This loss of youthful suppleness prevents our arteries from properly regulating blood flow and pressure.

In addition to causing high blood pressure, arterial stiffening can lead to organ damage,5 which we recognize as heart attacks, strokes, cognitive decline, dementia, kidney failure, and a host of other disorders.

Combatting loss of arterial flexibility can be as simple as incorporating two nutrients into your daily regimen.

In this article, we’ll examine how these two nutrients work together to reduce arterial stiffening, and ultimately, the degenerative disorders associated with it.

The Dangers of Arterial Stiffness

Healthy arteries consist of multilayered walls capable of constricting (narrowing) or dilating (widening) in response to the needs of the tissues they supply.

For years, scientists have studied the artery’s innermost layer, or endothelium, in an attempt to understand atherosclerosis and cardiovascular disease. They now know the damaging roles of blood sugar, inflammation, and an array of signaling molecules in disrupting blood flow.

New data show that in addition to the endothelium, the middle, muscular layer of arteries is also closely involved in the blood-flow abnormalities that produce not only cardiovascular disease and hypertension, but a host of other age-related disorders.

In fact, arterial stiffness has now been identified as a contributing factor to:

Arterial stiffness is also emerging as a powerful predictor of death risk in an increasing number of clinical age-related conditions.

The main immediate consequence of arterial stiffening is a steady rise in blood pressure, which contributes to destructive changes that further stiffen arteries—creating a vicious cycle. 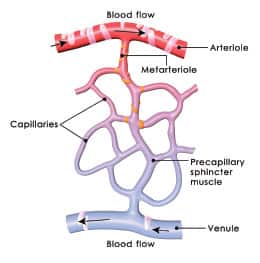 Studies show that aging alone, as well as conditions such as type II diabetes, contribute to a steady rise in arterial stiffness. These conditions can result in high blood pressure and damage to organs throughout the body.

One of the main contributors to arterial stiffening is calcification. This occurs when calcium from the blood is deposited into the normally supple arterial walls, leading to literal hardening of the arteries.

Increasingly, researchers are focusing on the lifestyle and nutritional factors that contribute to arterial stiffening—and, importantly, to its prevention.

Two key nutrients—vitamin D and vitamin K—have shown compelling promise in this area. Both play critical roles in helping our bodies to manage calcium, which makes them essential for preventing dangerous arterial stiffening.

Putting Calcium in its Place

Nutritionists used to think of vitamin D as the calcium-and-bone vitamin, and vitamin K as the blood-clotting vitamin. More current scientific evidence suggests that both vitamins play important roles in helping our bodies properly manage calcium.

Both vitamin D and vitamin K play a crucial role in calcium metabolism. Vitamin D promotes calcium absorption from the diet while also promoting calcium deposition in bones. In this way, it helps with the continuous remodeling of bone that helps keep our skeletons strong and adaptable.

Vitamin K, on the other hand, is essential for keeping calcium out of your arteries. This is because vitamin K modifies specific proteins in arterial walls, making them resistant to binding to calcium. This process prevents arterial calcification and stiffening.

In addition to keeping calcium out of your arteries, vitamin K promotes the proper deposition of calcium into bone, and vitamin K has been promoted recently as a way to prevent osteoporosis.

It is becoming increasingly clear that we need both vitamins D and K to get our dietary calcium into bones, where it belongs, and to keep it out of arteries, where it doesn’t.

Vitamins D and K can work individually and together to keep our arteries young and supple—and to prevent the myriad disorders associated with arterial stiffening.

Scientists have known for years that vitamin D is essential for proper calcium absorption from the diet. Now they are beginning to recognize its role in arterial health as well.

Unfortunately, vitamin D deficiency is all too common—a problem that may be behind arterial stiffening as well as other health problems.

Two studies have demonstrated that vitamin D supplementation is an important approach to preventing or alleviating cardiovascular disease, particularly in certain high-risk groups such as diabetics, older adults, and people with deficiencies in dietary vitamin D intake or insufficient sunlight exposure.

This approach has now been validated in multiple trials studying at-risk patients.

In a study of middle-aged type II diabetics, subjects received either a placebo or 1,000 IU of vitamin D daily.After one year, supplemented patients had a decrease in their measure of arterial stiffness known as the central aortic augmentation index. There was no improvement in the placebo group.

Another study examined adults with elevated blood pressure who were vitamin D deficient. After taking 4,000 IU of oral vitamin D3 daily for 6 months, they experienced a 12.3% reduction in arterial stiffness (as measured by augmentation index). No changes were shown in a control group receiving 400 IU/day (the standard “recommended” dose).

The preponderance of evidence shows vitamin D to be a critical factor in preventing the many disorders associated with arterial stiffening—especially those involving standard risk factors such as hypertension.

Next, we turn our attention to vitamin K, the other crucial factor in maintaining healthy arterial function well into advanced years.

For vitamin D, the typical dose range is 3,000 IU to 8,000 IU of vitamin D3 daily taken with a meal for better absorption.

Annual blood tests can enable one to know if they are taking the proper dose of vitamin D they need to achieve optimal levels of 25-hydroxyvitamin D.

Teflon for your Arteries

Vitamin K plays an important role in arterial health because of its role in managing calcium. Vitamin K is required for the activation of a biomolecule called matrix Gla-protein, which inhibits calcium from being deposited in artery walls.Think of it like Teflon for your arteries.

Many of us don’t get vitamin K in our diets, particularly if we consume processed foods, which are nearly devoid of the vitamin. Not surprisingly, then, studies of people who have insufficient vitamin K intake reveal increased markers of arterial stiffness, especially in older adults.

These factors put anyone without ample vitamin K intake at increased risk for arterial stiffening, particularly groups already at high cardiovascular risk, such as diabetics.

The good news is that studies in both animals and humans clearly show that supplementing with vitamin K helps prevent or reduce arterial stiffness.

Vitamin K1. Vitamin K1, also known as phylloquinone, is found in plants. Some of it converts to vitamin K2 in the body.40 Published studies show disease risk reduction in response to ingestion of vitamin K1.

Vitamin K2 (MK-4). MK-4 is found in meat, eggs, and dairy products.46 It is the most studied form of vitamin K to preserve bone health. It is rapidly absorbed and rapidly metabolized by the body.

Vitamin K2 (MK-7). MK-7 is found in fermented soybeans and fermented cheeses.52,53 What makes this form so special is that it remains active in the body for more than 24 hours.54 This is critical when protecting against calcification since matrix Gla-proteins quickly inactivate in the absence of vitamin K2.

There may be benefits to taking all three forms of vitamin K in a single supplement.

In a laboratory study, diabetic rats were shown to have reductions in activated matrix Gla-protein of 36%, compared with nondiabetic controls. This led to increases in major artery calcium deposits of up to 56%, and ultimately produced a 44% increase in arterial stiffness.

A recent human randomized controlled clinical trial illustrated the value of oral vitamin K supplementation, using a form of vitamin K2 called menaquinone-7, or MK-7. The study involved 244 healthy, postmenopausal women, a group whose risk for cardiovascular disease approaches that of men. Half received placebo, and the other half received vitamin K2 in the form of MK-7.

This three-year study showed that supplementation with MK-7 significantly reduced (by 50%) levels of inactivematrix Gla-protein, indicating vitamin K’s protective effect on cardiovascular health.39 The results from this study showed the vitamin K (MK-7)-supplemented women had significant reductions in arterial stiffness.

As an added benefit, those with the highest stiffness at baseline experienced significant improvements in a host of other arterial health parameters related to arterial suppleness as well.

Taken together, this combination of animal and human data strongly indicates the need for ample vitamin K supplementation for all of us who are at risk for arterial stiffening and the resulting hypertension, cardiovascular disease, and premature death.

The term “arterial stiffness” refers to an abnormal stiffening in the walls of large arteries leading from the heart to major organs. In healthy young people, those large arteries remain elastic, while more distant, smaller arteries are stiffer.

This has the effect of “dampening” the large pressure waves produced with each heartbeat, which allows blood to flow smoothly, without big fluctuations in pressure, through the vital capillary beds that nourish all of our tissues.

The lack of major pulsations in capillaries protects them from pressure-induced damage, allowing for normal exchange of oxygen, carbon dioxide, nutrients, and waste products.

But with aging, and under constant attack by blood sugar, inflammation, and other factors, those central arteries begin to stiffen.

The result of that stiffening is a loss of the pressure damping effect, leading to highly pulsatile pressure waves reaching the delicate capillary beds, which in turn induces physical stresses on capillaries, and disrupts their normal function.

The end result is damage of the organs supplied by those capillaries, which we recognize as heart attacks, strokes, brain changes leading to cognitive decline and dementia, liver disease, kidney failure, and a host of other disorders related to atherosclerosis, aging, or both.

Preventing arterial stiffening, then, is an essential step in preventing virtually all age-related organ failures and related disorders.