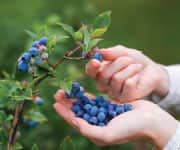 A randomized, double-blind trial has revealed increased neural response in men and women who supplemented with freeze-dried blueberry powder for 16 weeks.*

Participants between the ages of 68 and 92 with mild cognitive impairment who did not have dementia or other neurologic conditions received either a placebo powder or a powder that provided the equivalent of a half cup of whole blueberries, taken twice daily for 16 weeks. Functional magnetic resonance imaging (fMRI) administered during a task involving working memory was conducted before and after the treatment period to evaluate changes in the brain.

Compared to functional magnetic resonance imaging results at the beginning of the study, participants whose diets were supplemented with blueberry powder had significant increases in activity in three regions of the brain after treatment, while the placebo group experienced a small region of decreased activation.

Editor’s Note: Those who received blueberry also experienced improvement in one aspect of memory accuracy. The authors remark that the findings support the hypothesis that flavonoid compounds such as those found in blueberries contribute to improved vascular function.