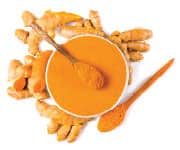 An article in Antiviral Research reports that curcumin, a compound occurring in the spice turmeric, acts against Zika and chikungunya, two mosquito-borne viruses.*

Cells were pretreated with curcumin or its analogs prior to infection with chikungunya or Zika. Researchers Bryan C. Mounce and colleagues observed a decrease in the viruses in association with pretreatment with curcumin in comparison with untreated controls. Curcumin was more effective when administered prior to or at the time of infection than after infection.

The compound, when directly administered to the viruses, reduced their infectiousness.

The team determined that curcumin interfered with the binding of enveloped viruses to cell surfaces. The data suggest that curcumin does not destroy viral particles, but alters their membranes, and that curcumin could affect host lipid membranes involved in viral infection.