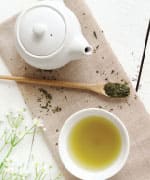 An analysis of two ongoing prospective studies conducted in China found an association between regular consumption of green tea and a lower risk of cardiovascular and all-cause mortality during a median follow-up period of 8.3 years for men and 14.2 years for women.*

Editor’s Note: When deaths from cardiovascular disease were examined, the reduction in risk over follow-up was 14% lower for regular consumers of green tea.