Colorectal cancers are the third most common cancer that affects both men and women, and the second leading cause of cancer-related deaths in the US.

The numbers of deaths have been declining in recent years, thanks to early screenings and colonoscopies.

More can be done to help prevent the 50,000 deaths attributable to colorectal cancer yearly.

One of the most promising discoveries is that green tea and its most active polyphenol constituent, epigallocatechin gallate (EGCG) has potent actions against colorectal cancer.

In the past year, new research findings have been published on green tea’s effects on colorectal cancer.

Together, these studies tell a compelling story about green tea’s potential cancer-preventive properties. 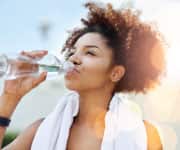 Researchers decided to pool data from dozens of studies that evaluate green-tea consumption and the risk for colorectal cancers.

Published in 2017, this ambitious study combined 29 separate epidemiological studies, with a total of more than 1.6 million individuals.

This meta-analysis had two main findings:

COLORECTAL CANCER BY THE NUMBERS

The most recent year that comprehensive statistics on colorectal cancers are available is 2014, when:

The good news is that rates of both colorectal cancer incidence and mortality have been gradually falling, but only by around 3% per year overall. This is largely attributable to increasing rates of screenings and colonoscopies.

In an effort to better understand the impact of green tea on reducing the risk of colon cancer, researchers designed two studies with mice. Both sought to determine whether green tea reduced the presence of tumors in the colon.

The scientists conducting the first study had already shown that a green tea polyphenol extract significantly inhibited the formation of precancerous lesions in the colon.

Next, they wanted to assess green-tea extract’s impact on colorectal tumors themselves. To determine this, they treated rats with a chemical that induces colorectal cancer. The rats were also fed a high-fat diet, which is known to promote colorectal cancers.

Half the animals were supplemented with green-tea polyphenol extracts for 34 weeks, while the other half served as unsupplemented controls.

The study showed that, while most of the control animals developed colorectal cancers, significantly fewer of the supplemented rats did.

And of the supplemented animals that did develop tumors,

In addition to these direct impacts on tumors, the green-tea polyphenol extract had numerous other anti-cancer benefits.

The second animal study demonstrated a property of green-tea extract that is particularly important for today’s American population because it diminishes the impact that poor diet has on cancer.

And it was found to be even more effective in the group of mice fed a typical western diet high in fat and simple sugars. It also prevented weight gain and fasting glucose elevations only in that “poor diet” group. This was a key finding because these kinds of poor dietary choices are linked to increased cancer risk through increased insulin production and chronic inflammation.

So green-tea extracts appear capable of helping to overcome the harmful impact of poor dietary habits on the promotion of colorectal cancers—truly encouraging news. A new study not only validates the findings from epidemiological and animal studies, it also provides insight into how green tea protects against colorectal cancers.

Like all stem cells, cancer stem cells are extremely robust. And because they divide infrequently, they are relatively resistant to chemo- and radiation therapies. Cancer stem cells are widely held to be responsible for the recurrence of treated cancers, functioning in essence as malignant “seeds” that can restart the malignant process even after the bulk of a tumor has been destroyed.

The way EGCG suppressed cancer stem cells was by downregulating a fundamental signaling pathway called Wnt/beta-catenin. This pathway is crucial in controlling the development of stem cells into functioning cells in tissues. Abnormal activation of the Wnt/beta-catenin pathway is a potent cancer promoter.

This pathway is already a target for pharmaceutical drug developers. Now, the authors of this study suggest that EGCG’s ability to suppress this signaling pathway could make it a promising agent for colorectal cancer intervention.

It’s nearly impossible to perform a human study demonstrating direct reduction in cancer occurrence because it would be unethical to expose human subjects to cancer-inducing chemicals. But scientists often use logic chains to draw strong conclusions about the likelihood that a substance—in this case, green tea—will have similar protective effects in humans as demonstrated in animal studies.

The logic here is powerful:

1. People who drink larger amounts of green tea have lower rates of cancer than those who drink less.

2. Animals that are given green tea and then exposed to cancer-causing chemicals develop fewer and smaller cancers when treated with green-tea extracts.

3. Those green tea-treated animals demonstrate significant reductions in known tumor-promoting pathways and signaling molecules that occur in humans as well.