On a daily basis, our DNA is under attack from numerous sources, including radiation, oxidative stress, environmental hazards, and dietary carcinogens.

The extent to which DNA damage occurs—or can be prevented—correlates closely with how long we will live.

One course of action is to protect ourselves with compounds that can prevent DNA damage before it leads to cancer.

Based on extensive research, scientists have discovered a natural hops-derived flavonoid compound, xanthohumol, that has been shown in clinical (human) studies to reduce DNA damage in cells—which may reduce the risk of cancer.

Two additional compounds—chlorophyllin and watercress extract—have been recognized for their multitargeted capacity to reduce DNA damage.

The combination of these targeted compounds may offer the best possible natural protection against age-accelerating, cancer-inducing damage to our DNA.

This is especially important for those who occasionally or routinely ingest overcooked foods and other dietary constituents that inflict considerable harm to our cellular DNA. 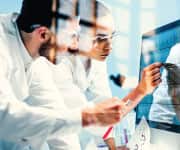 Genetic mutations that occur as a result of DNA damage increase the risk of developing cancer.

Cancer is the second leading cause of death in Americans. Abundant citations in the scientific literature focus on DNA damage and its prevention as a way to protect against malignancies.

Scientists are excited about research on the DNA protective benefits of a flavonoid present in hops, xanthohumol.

Research data show that xanthohumol has a cancer-prevention profile and acts by a variety of mechanisms to prevent cancer initiation. The compound’s ability to prevent DNA damage has scientists most intrigued.

In a randomized, placebo-controlled clinical trial, 22 healthy individuals drank a malted beverage containing 12 mg of xanthohumol or a placebo for 14 days.

Subjects had their blood and urine collected before, during, and after the supplementation period.10

The researchers were specifically looking for changes in DNA stability in white blood cells, as well as the urinary excretion of damaged fragments of DNA and of reactive oxygen species.

This phase of the study showed that subjects drinking the xanthohumol beverage experienced a remarkable reduction in DNA damage compared with those drinking the placebo.

By the end of the 14-day study, the effect reached a reduction of 33% in DNA damage.

Next, the researchers wanted to find out how well xanthohumol would equip cells with resistance to DNA breaks under conditions of chemical stress. To test this, they exposed subjects’ cells to hydrogen peroxide, a potent generator of the reactive oxygen species that impose DNA-damaging chemical stress.

Xanthohumol did not disappoint.

Once again, cells from xanthohumol-supplemented subjects proved markedly resistant to chemically-induced DNA damage compared with those from placebo recipients. This time a significant effect was evident by Day 7, and climbed to a maximum 53% reduction in DNA damage at the end of the study period.

In order to be certain that it was the xanthohumol that was responsible for this protection and not some other component of the test beverage, the researchers carried out a second phase of the study using a capsule of purified xanthohumol at the same 12-mg dose.

This second phase demonstrated similar results: The pure xanthohumol produced a 39% reduction in DNA damage, and a 28% improvement in the resistance to DNA damage induced by hydrogen peroxide.

The same group of scientists then carried out a follow-up study, pushing xanthohumol’s protective effects even harder. This time, they evaluated how well the supplement works against the everyday challenge of dietary carcinogens.

To test this, 22 participants consumed a drink containing 12 mg of xanthohumol. The researchers then stressed the subjects’ DNA by exposing blood cells to representatives of three major classes of DNA-damaging dietary carcinogens:

The xanthohumol led to reductions in DNA damage caused by NDMA, benzopyrene, and the heterocyclic amine.

And when the researchers conducted a follow-up trial using xanthohumol capsules (instead of the drink), it once again showed similar reductions in DNA damage in the face of each compound.

This study is of great importance because it elucidates some of the molecular mechanisms by which xanthohumol may protect human cells from the first step in carcinogenesis: the DNA damage that mutates the genetic code and provides the spark needed to trigger malignant transformation.

Animal studies have gone the next step in demonstrating the chemoprotective effects of xanthohumol. They have shown that in addition to preventing DNA damage, xanthohumol also prevents the development of precancerous lesions.

To prove this effect, researchers exposed xanthohumol-supplemented healthy rats to a common family of dietary carcinogens (called heterocyclic amines) that forms when meat is cooked at high temperatures.4,13 Heterocyclic amines have been linked to breast, prostate, colorectal, gastric, and pancreatic cancers.

In this study, the xanthohumol-supplemented animals experienced a significant 50% reduction in the numberof precancerous sites in their livers, and a 44% decrease in the size of the lesions, demonstrating a robust effect.4 Not surprisingly, the researchers found evidence that the supplement achieved these results by preventing DNA damage in liver cells.

These human and animal studies show that xanthohumol protects DNA from damage both directly from chemical stress and indirectly from dietary carcinogens.

Broadening the Spectrum of DNA Protection

Humans aren’t alone in our need for DNA protection. All living things are challenged in protecting against DNA damage, including plants and animals.

Plants face even greater risks than animals do in this regard because they can’t seek shade, water, or nourishment when DNA-threatening environmental stress sets in. This means that plants are naturally rich in biochemical DNA-protective compounds. That’s good news for humans, because these plant compounds seem to work as well in our cells as they do in theirs.

Several plant species and extracts are especially known for their ability to defend DNA against the chemical, radiation, and other stresses that threaten its integrity.

Chlorophyllin is a water-soluble derivative of chlorophyll, a pigment that makes plants green and captures light and channels it safely into energy within plant cells.

Studies show that chlorophyllin exerts powerful protection against DNA damage. Like most natural compounds, chlorophyllin acts by multiple mechanisms, one of which is by blocking carcinogens and making them less bioavailable.

This benefit was vividly seen in two studies showing chlorophyllin’s ability to protect against the damage caused by two known DNA-damaging carcinogens: aflatoxins and heterocyclic amines.

The first study examined people who had an elevated risk of liver cancer because of their consumption of aflatoxin-contaminated foods. In this study, taking chlorophyllin led to a 55% reduction in median urinary levels of a marker of aflatoxin-induced DNA damage. 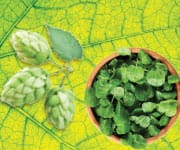 Watercress is a cruciferous vegetable, a group of plants widely recognized for their multitargeted anticancer activities. Watercress extracts are rich in antioxidants capable of fighting the oxidative stress that damages DNA.

In human studies, supplementation with watercress significantly reduced DNA damage by up to 24% in healthy volunteers. This benefit was seen both at rest and following vigorous exercise, which is known to briefly but powerfully induce DNA damage by oxidative stress.

This indicates the potential of watercress to protect DNA in stressful situations that could otherwise lead to dangerous DNA damage.