Role of Bifidobacteria in Long-Term Health

An exciting area of medical research is focused on the gut microflora (or microbiome) that resides in the human digestive tract.

These trillions of microorganisms help regulate our immunity, endocrine system, digestion, and metabolism.

Scientists are discovering that the gut microbiome is linked with mood, cardiovascular health, and the ability to fight off disease.

The National Institutes of Health launched the Human Microbiome Project to encourage advancement in the knowledge and application of the human microbiome for health and longevity.

Among the most important and beneficial bacteria of the gut microbiome are those belonging to the group bifidobacteria. Research shows that bifidobacteria have wide-ranging health benefits—they fight allergies, high cholesterol levels, respiratory diseases, stress, and anxiety. In an animal study, they reduced tumor cell growth.

To promote restoration of healthy bifidobacteria levels, researchers at UCLA School of Medicine studied a unique prebiotic fiber called xylooligosaccharide (XOS), which is made from non-GMO corn cobs.

XOS provides an ideal natural environment for healthy bacteria to thrive in the gastrointestinal tract.

In the studies, researchers found that XOS helped restore intestinal health and increases the presence of bifidobacteria in as little as 14 days. And, it did so without promoting other harmful bacteria.

Given the numerous ways that bifidobacteria work to ensure our health, many people want to boost their healthy gut bacteria flora. XOS is a convenient, novel method. 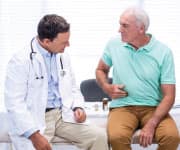 According to research, the proportion of healthy bifidobacteria in the human gut is about 60% in infancy.

Like everything in our body, bifidobacteria need the right type of nourishment to grow and multiply. Keeping your bifidobacteria well fed ensures their presence as health-promoting residents of your digestive tract.

Many Americans’ diets are notoriously deficient in dietary fiber. And, while bifidobacteria’s number-one food source is dietary fiber, studies have revealed that they particularly thrive on a prebiotic called xylooligosaccharide (XOS). This prebiotic was effective even when taken in relatively small amounts.

The Search for a Targeted Prebiotic

The term prebiotic might be new to some people, but prebiotics have been around for years. They are better known as soluble fiber.

That’s why researchers have been searching for a prebiotic with targeted bifidogenic effects—meaning one that promotes the growth of bifidobacteria. That search has led researchers to the special prebiotic xylooligosaccharide, or XOS, derived from non-GMO corn cob.

Prebiotics benefit the individual by stimulating the growth and/or activity of healthy bacteria in the colon, thus improving the individual’s health.

It’s important to note that all prebiotics are fiber, but not all fiber is prebiotic. For a food ingredient to be classified as a prebiotic it must:

The most compelling of the new studies on XOS boosting bifidobacteria count were conducted by microbiologists and clinical researchers affiliated with UCLA School of Medicine.

In a rigorous double-blind, randomized, placebo-controlled study, 32 healthy subjects received either a placebo, 1.4 grams of XOS, or 2.8 grams of XOS every day for eight weeks.

The preparation contained 70% XOS, so that the total amount of XOS ingested in the two study groups was 1 gram or 2 grams, respectively.

The big question: Would it be possible for such extremely low doses of XOS to significantly improve bifidobacteria levels?

The answer was a definite yes.

This is significant because some fiber supplements can produce increases in both good and bad microorganisms, which can essentially cancel out the benefits of increasing bifidobacteria levels.

No significant side effects occurred in any of the three study groups at either the 1-gram or 2-gram dose.

Keep in mind that these studies used doses of XOS far below the 10 grams–20 grams/day required to achieve similar results with other prebiotics made from fiber.

But that’s just half of the story. This study went on to show that taking XOS resulted in numerous clinical improvements throughout the body.

For example, taking XOS led to a significant increase in fecal acidity. This is a beneficial effect that may help to ward off less desirable organisms, while promoting the growth of healthy bacteria. This benefit has been reported previously with XOS supplementation in humans.

An imbalanced microbiome is associated with metabolic syndrome. This study shows us that by restoringhealthy levels of bifidobacteria, XOS may help reduce several common metabolic health risks.

These benefits are further testament to the system-wide impact of boosting the bifidobacteria content in the digestive tract.

Scientists around the world are intensifying research on the broad health benefits that result from the trillions of bacteria in our intestines known as the gut microbiome. One particular bacteria known as bifidobacteria has been of great interest to researchers due to its ability to modulate so many areas of our health, especially our immunity.

Research clearly demonstrates that a strong bifidobacteria population can help to modulate an ailing immune system, restore immune balance by quelling excessive inflammation while also restoring effective immune surveillance against cancer cells. An active presence of bifidobacteria can have a beneficial impact on the reduction of diabetes, heart disease, allergies, infections, and cancer.

While bifidobacteria declines with age and can result in the beginning of degenerative diseases, scientists have looked for ways to increase its growth and viability. They’ve discovered that the unique fiber XOS dramatically increases the bifidobacteria population and with it, our immunity.

The Importance of Healthy Bacteria

It is still under investigation as to why bifidobacteria respond so positively to supplementation with XOS at low doses that don’t cause side effects.

Studies show that bifidobacteria utilize precisely the kinds of carbohydrates that humans can’t digest. This is especially true of the so-called oligosaccharides, of which XOS is one important example. Genetic analysis of bifidobacteria suggests they are well-equipped to carry out that digestion, which not only feeds the bifidobacteria, but also produces useful molecules called bacteriocins that help suppress growth of the less-desirable bacteria.

Together, these findings highlight the importance of feeding these essential bacteria to keep them healthy so they can keep us healthy.

Microorganisms that reside in the human digestive tract, also called the gut microbiome, are a critical factor in sustaining our resistance to disease and promoting vigor and good health.

Many people realize the importance of taking a probiotic to help increase the numbers of beneficial bacteria.

One prebiotic, xylooligosaccharides, or XOS, has now been shown in human clinical trials to selectively boost bifidobacteria populations in the gut in low doses!

These studies demonstrate systemic benefits when increasing bifidobacteria organisms in the digestive tract.