» Health Blog » Uncategorized » DO SLEEP MEDS KEEP YOU UP AT NIGHT?

DO SLEEP MEDS KEEP YOU UP AT NIGHT? 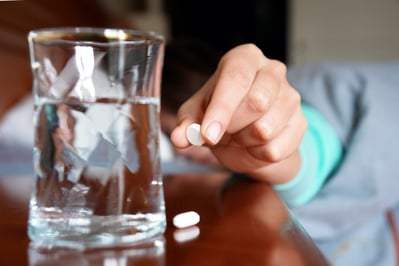 More than 50% of Americans complain they cannot sleep, and 37 percent of those polled in a Consumer Reports survey claimed they had used some type of sleep aid in the past year. Insomnia, a real problem, accounts for about 5.5 million medical visits each year.

Some reasons for insomnia include a longer work week with less time for sleep (an August 2015 Gallup Poll showed 17% of people log in 60+ hours per week), an increased use of medications (i.e. some blood pressure meds and anti-depressants disrupt sleep) or the perpetual blue light beaming from our electronic devices, impairing our melatonin production. Whatever the reason, more and more people are becoming sleep aid junkies. In 2015 alone, Americans spent approximately $41 billion on sleep aids or remedies with projections that it will grow to $76.7 billion by 2019.

But what do we know about the different sleep aids on the market? Are they effective or are they dangerous? Or both? With persistent sleeplessness comes exhaustion, and even desperation. Most of the time, little to no care or thought is given to the short and long-term effects of sleep medications. As a matter of fact, the survey also found that about half the people who took sleep aids either took them for longer than recommended periods of time or combined them with other contraindicated medications or supplements.

Prescription sleep aids are no joke. A popular prescription sleep aid, a hypnotic, or “Z-drug”, is designed to slow down the central nervous system (CNS) by acting as a general CNS depressant at the GABA receptors. The extra GABA activity triggered by the drug inhibits neuron activity associated with insomnia. In other words, it slows down the brain.

The benefits of these drugs, however, can be much less than expected, with risks far greater than considered. A 2015 study published by the American Journal of Public Health found that people who were prescribed sleeping pills were more likely to be in car crashes, with the risk equivalent to those whose blood alcohol concentration levels measured above the legal limit. This may be due to what is called the “hangover effect” of some sleep medications, which can impair coordination and balance during waking hours. Not only does this imbalance make people more likely to crash their vehicles, one study found evidence that Z-drugs are associated with increased risk of hip fractures in older persons.

Prescription sleep aids are intended for temporary use, but rarely do insomnia patients see their condition as temporary, which creates a plethora of problems the longer the patient uses them. These medications also come with a laundry list of potential side effects such as headaches, dizziness, drowsiness, nausea, myalgia, dyspepsia, back pain, hallucinations, anxiety, drugged feeling, lethargy, increased risk of depression and even bizarre behaviors such as sleep-cooking and night-time snacking.

After chronic use, hypnotics can be addictive, as their effects can wear off in three to four weeks, requiring higher and higher doses to get the same result. Also, rebound insomnia can occur when a patient discontinues their medication, making it even more difficult to sleep than it was prior to starting the medication.

Stopping the medication might also result in a slew of withdrawal symptoms, as is the case with any addictive substance. Even six months or more after withdrawal from some hypnotics, subjects suffered from prolonged impairment of attention and psychomotor cognitive functioning.

Ongoing sleep shortage contributes to a multitude of health issues including depression, heart disease, lowered immunity, obesity and type 2 diabetes so getting enough sleep is important.

However, at what price are we getting this much-needed sleep? By using drugs that potentially put our health at greater risk, we could be exacerbating insomnia, a condition some experts consider a public health crisis.