Phosphatidylserine, ashwagandha, and melatonin, provide a wide array of nutraceuticals with evidence that backs their use for sleep and relaxation support. In clinical practice however, we often lack the time to do a deep dive into the data behind these tools and tend to avoid using supplements we do not have time to fully research. A short summary of the mechanisms of action and clinical data supporting a variety of natural substances that promote relaxation and/or sleep is presented below.

The balance of the neurotransmitters glutamate and gamma-aminobutyric acid (GABA) in the central nervous system plays an important role in cortical excitability.1An appropriate balance of excitation and 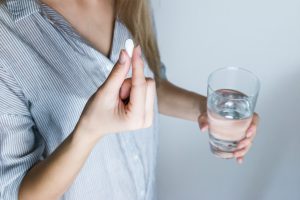 inhibition is necessary for healthy sleep, a balanced mood, memory, and cognitive processes. Glutamate is the main excitatory neurotransmitter while GABA is the main inhibitory neurotransmitter. Lower GABA concentrations have been shown to be associated with poor sleep quality and have been demonstrated in individuals with major depressive disorder and higher trait and state anxiety. GABA also helps to reduce the response to fear or anxiety-provoking stimuli. Many sedatives bind or stimulate GABA receptors, reinforcing the importance of this neurotransmitter for sleep.

In individuals with attention deficit hyperactivity disorder (ADHD), significantly lower GABA levels have been observed in a region of the brain known as the anterior cingulate cortex which is associated with decision making, emotion, and impulse control. Additionally, measures of impulsivity were shown to be negatively related to GABA levels, that is, individuals with the lower GABA levels were more impulsive. Glutamate, on the other hand, has been shown to be twice as high in children with ADHD, tipping the balance to that of an excitatory state.Supplemental administration of GABA has been shown to significantly increase alpha wave patterns in humans, accompanied by reduced levels of anxiety.Alpha waves predominantly occur during wakeful relaxation, and are present during activities such as meditation. Orally, GABA is usually well tolerated but some may experience side effects such as nausea, tiredness, and a mild decrease in blood pressure at higher dosages.

Although the ability of supplemental GABA to cross the blood-brain barrier (BBB) under normal conditions is questionable, there is evidence of a specialized GABA transporter in the BBB. There also are many settings in which the permeability of the BBB is increased, including with exposure to inflammatory agents such as histamine and bradykinin. It also has been proposed that the effects seen clinically with GABA are due to the binding of receptors in the enteric nervous system, and are modulated by the vagus nerve. Additionally, liposomal delivery systems have been shown to facilitate transport across the BBB and increase availability of therapeutic agents in the central nervous system.

Green tea is well known for its high amounts of antioxidants, particularly one known as epigallocatechin gallate or EGCG. However, green tea also contains a high amount of an amino acid known as L-theanine. L-theanine is widely used and studied in Japan, a culture particularly known for their tea consumption. L-theanine has been observed to promote relaxation and reduce stress by a variety of possible mechanisms, with clinical evidence also showing these benefits.

Studies have shown that L-theanine increases alpha-wave activity in the brain, as well as the levels of serotonin, dopamine and GABA-L-theanine has been shown to be neuroprotective, in part by having an antagonistic effect on glutamate subtype AMPA receptors,also increasing glutathione as well as its related antioxidant enzymes (superoxide dismutase and catalase) under stressful settings. It also supports nerve growth and new pathways via increasing levels of brain-derived neurotrophic factor (BDNF).

5-hydroxytryptophan (5-HTP) is an amino acid that is produced in the body from the essential amino acid tryptophan. 5-HTP is the immediate precursor to serotonin, which converts to melatonin. The enzyme 5-hydroxytryptophan decarboxylase converts 5-HTP to serotonin and requires vitamin B6 (pyridoxine). In animals, this reaction has been shown to occur primarily in the brain, liver, kidney and adrenals. 5-HTP is well absorbed orally, and easily crosses the blood brain barrier.

In children, at a dosage of 2 mg/kg at bedtime, 5-HTP has been shown to significantly reduce the occurrence of night terrors. There were no adverse effects seen with the treatment, which continued for 6 months, and EEG reading were observed to be normal. In another study in a pediatric population having headaches in association with sleep disorders, 5-HTP was also found to improve sleep, particularly frequent awakenings. In adults with normal healthy sleep, 5-HTP was observed to increase rapid eye movement portion of sleep.

5-HTP has been studied in different settings of acute anxiety and shown to significantly reduce the reaction to panic challenge in patients with panic disorders. In patients diagnosed with anxiety disorders, 5-HTP has been shown to lead to a moderate reduction of symptoms as measured by the 90-item symptoms checklist (SCL-90) and the State Scale of the Spielberger State-Trait Anxiety Inventory. There is some evidence in clinical studies for the treatment of depression, however the quality and size of studies are limited.The combination of GABA and L-theanine has been studied in invertebrate and vertebrate models, and shown to significantly regulate the sleep latency and duration as well as significantly increase the sleep quality as compared to single administration of either amino acid. Long-term administration also was observed to increase levels of GABA and the GABAA receptor.

Side effects that can occur with higher dosages of 5-HTP can include nausea, vomiting, and diarrhea. 5-HTP conversion to serotonin peripherally has the potential to increase gut motility. Serotonin syndrome, while a possibility, has rarely been reported. Clinical studies have been performed using 5-HTP in combination with tricyclic antidepressants, monoaminoxidase inhibitors, selective serotonin reuptake inhibitors, and serotonin syndrome was not seen in any of these settings. However, the small sizes of these studies should be considered and the possibility of this syndrome closely monitored for especially if used in combination with these medications.

Dosages and mechanisms for these and other supportive nutrients which have been studied in the settings of sleep and relaxation are listed below. These, and all supplements, should be used with caution and consider the interactions that may exist with medications, as well as the overall health of the individual.