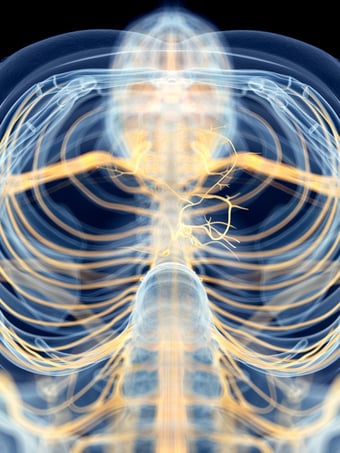 The vagus nerve continues to make news as a significant player in the gut-brain connection. Once considered a nerve that primarily mediates suppressive functions such as fullness and nausea, recent research conducted at the Icahn School of Medicine (and published September 20 in the journal Cell) has established the vagus nerve as an essential component of the brain system that regulates reward and motivation. The gut is recognized as a player in motivational and emotional states, but the actual neuronal circuitry has remained largely unknown, until now.

The vagus nerve branches are difficult to study due to their “intricate intermingling,” but researchers at the Icahn School of Medicine utilized a state-of-the-art technology known as “optogenetics” that used light to manipulate specific neurons. “This optical activation of gut-innervating vagal sensory neurons recapitulates the hallmark effects of stimulating brain reward neurons.”

What they discovered was that the right vagal branch, not the left, connects to the dopamine-containing reward neurons in the brain. Surprisingly, the researchers also discovered an asymmetric ascending pathway of the vagal branches into the central nervous system, further clarifying varied roles of specific vagal neurons.

This novel gut-to-brain neural circuit gives a concrete link between visceral organs and brain function as it relates to the reward circuitry, and may help to inform novel targets for vagal stimulation therapy, particularly for eating and emotional disorders.